The humans came before us, and they went before us too. Stories passed down for generations tell of their mad rise to power – building precarious spires of metal and plastic, creating tools and electric beasts to tear up the world and shape it in their image. Eventually, their tools became too powerful to contain. It all ended with the creation of the bomb. The bomb was a device of evil. It was designed to level cities,flatten mountains, and burn entire forests like kindling. In the end, their selfishness led the humans to use the bomb, and - in the blink of an eye - they were gone.

We came after. We crawled out of the ashes of that broken world. Out of holes and caves, ponds and oceans. We greeted a new world. The buildings of the humans lie in ruin – hollow, rickety spines that serve as a grim reminder of the past. Their tools and beasts lie in rust and disrepair, though there have been rumors of powerful, dangerous devices that are still operational. We eke out our subsistence from the land and water, and we live in peace with the healing world. Life isn’t easy, but we persist. The humans came before us, and they left behind a scarred world. Our world.

Palingenesis is a tabletop roleplaying game for 3-6 players. It’s set in a world permanently scarred by human impact, but with no humans to be found. Players control a party of evolved (and possibly anthropomorphized) animals, plants, and fungi.

Palingenesis is a game about exploring, resolving conflicts, and rebuilding. It’s a messy and dangerous game, but also a rewarding one.

Palingenesis is heavily inspired by the science fiction/fantasy films of the 1970s and 80s. Examples include Nausicaä of the Valley of the Wind, Silent Running, Planet of The Apes, Fantastic Planet, Starchaser: The Legend of Orin, and Logan’s Run. It’s also inspired by the general post-apocalypse wackiness of games like Gamma World, Metamorphosis Alpha, Caves of Qud, and Cataclysm: Dark Days Ahead.

Check out more of Laurie's work at https://ralpho.net/portfolio/!

cammmmmy i adore everything about this .. the concept is so wonderful ahh and the art is so good, the artist must be a pretty cool person thinking face emoji ... also ur writing is so wonderful i really like the way you frame the perspective of the post-human creatures 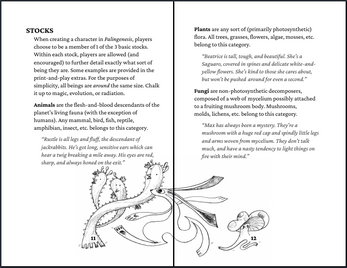 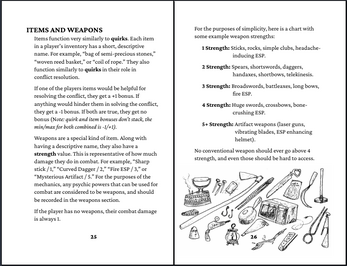